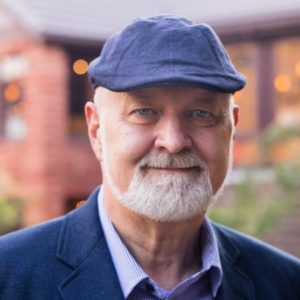 As a college student studying pre-medical microbiology, David Farland was torn: He also wanted to be a writer. So he decided to be a doctor who writes on the side.

Fortunately, he soon found out that the desire to write was overwhelming. At the same time, his interest in medicine waned. “I found my biochemistry classes to be so boring, I could hardly stay awake in them,” he says.

As David considered writing more seriously, he heard that the average writer spends seven years learning how to write well enough to get published. He wondered, was it possible to learn to write that well in less than seven years? Could it be done in one year?

Taking cues from his scientific studies, David decided he would apply the same logical approach to the study of publishing. He developed many theories that have informed his approach to writing, including the Stress Induction/Reduction Theory of Storytelling that suggests that stories serve a physiological need in readers.

Writers of the Future Contest

Armed with his theories, David determined to win first place in a writing contest within one year. He prepared several manuscripts and submitted them to various contests—and won them all.

Publishing contracts and illustrious awards followed and set the tone for his career. He went on to publish some fifty novel-length works and dozens of short stories, both under his given name (Dave Wolverton) and under his pseudonym, David Farland.

In the early 1990s, Dave accepted a position as lead judge for one of the world’s largest writing contests and began to mentor students. A few years later, he was also invited to teach creative writing at Brigham Young University.

Who is David Farland and What Teaching Credentials Does He have?

Dave is an award-winning, New York Times Best Selling fiction writer. He has won numerous awards for his fiction. He has written or edited over sixty novels and anthologies for adults, young adults, and middle-grade readers. Beyond that, he has worked as college creative writing instructor, a fiction editor, a videogame designer and scripter, and as a movie producer.

As Dave Wolverton, he began his writing career in 1987 when he won the Writers of the Future Gold Award for his short story, ?On My Way to Paradise,? and shortly afterward was given a three-novel contract by Bantam Books. His first novel spent several months on the Locus Science Fiction Best-seller List, and won a Philip K. Dick Memorial Special Award as one of the best science fiction novels of the year. Dave continued writing science fiction for the following ten years, writing several bestsellers among his own novels along with tie-in novels for major franchises like Star Wars and The Mummy until at the end of ten years he decided to follow his childhood dream of writing fantasy, and began writing also in that genre.

With the move to fantasy, he changed his writing name to David Farland, so as not to confuse his audience. His first fantasy novel, The Runelords, became a runaway hit around the world and has millions of readers. The third book in the Runelords series, Wizardborn, hit the New York Times best-seller list. Dave is now completing the ninth and last book of the series.

In 1999, Dave set a Guinness Record for the world’s largest book signing.

Dave is also the lead judge for the L. Ron Hubbard Writers of the Future Contest, and each year he reads thousands of stories, edits an annual anthology, and teaches writing classes to new writers.

As an instructor, Dave has taught workshops in conjunction with the Writers of the Future, has taught upper-division classes in science fiction and fantasy writing at Brigham Young University, has appeared as a guest lecturer and instructor at hundreds of conventions, and has taught many other workshops at various universities. Some past students who have recently published include New York Times bestselling YA author Brandon Mull, New York Times Best Selling fantasy author Brandon Sanderson, international bestseller Stephenie Meyer, and #1 New York Times Best Seller Jessica Day George.

Dave has also worked as a designer on such international hits as StarCraft’s Brood War, and as a video game scripter.

In 2002 Dave went to work as a movie producer in Hollywood, raising millions of dollars for independent films. There he worked with screenwriters, directors and various studio heads. He is currently the head of East India Press, a new publishing company that brings books out as enhanced novels, e-books, audiobooks, and as print books.

Today Dave shares his knowledge and expertise with writers around the world through his Writing Tip articles, books on writing and various online and live lectures and workshops. He is now on a mission to create the world’s best writing group. He has now launched Apex-Writers.

About his life, David says, “I seem to have become a writer who now works as a doctor on the side—a story doctor.”

Download Daily Meditations Free, 100 of some of the best writing tips and advice from a bestselling author with over 45 years of experience.