Last week I managed to anger a number of people when I talked about sales in the young adult genre. To be honest, I had no idea how many people have misconceptions about the genre, and that is kind of a shame.

For example, I was sent information from a couple of popular blogs that complained about the male dominance in the genre. One accusation was that the male editors don’t publish enough female authors, but the truth is that the vast majority of editors in children’s literature have been female for nearly fifty years.

Of the top 20 purchasing editors listed in Publisher’s Marketplace, none are men. In fact, it looks as if only about six of the top 100 editors are male. That’s a 20/1 ratio. So if you’re a female author who isn’t selling in the YA market, it has nothing to do with male editors.

The second complaint that I saw published on blogs was that far too many men were publishing in the industry, sort of sucking all of the air from the room.

But that is far from true, too. Given that teen populations are roughly half male and half female, you’d expect that we’d see a 50/50 split between male and female authors. But we don’t. In the past year, Publisher’s Marketplace lists about 420 YA fiction sales for the year. (They actually list 431, but several of those are nonfiction books that have been erroneously logged as fiction.) Of those, 49 were either written by male authors or had a male co-author. The truth is that male solo authors are getting about 10% of the sales to publishers in the genre.

That doesn’t bother me. You see, authors today don’t really need publishers. We can go out and do it on our own. I think of it like this: Imagine that you’re driving on a road trip and you stop for the night. You’re hungry for pizza, and discover that in a town of 300,000 people, there isn’t a single pizza restaurant.

Now, if you happen to be a pizza chef, you’d say to yourself, “Bingo! I see a business opportunity.”

When I see a market that is being underserved, I see a business opportunity. I could write “boy books” and self-publish, and perhaps make a killing. In fact I heard from one author who is doing just that.  Or maybe as an editor I’d contact a major publisher and suggest, “Can I work on a line of ‘boy books’?” Or I might even go so far as to say, “I think I’ll open a publishing company.”

When I see these numbers, I don’t think that anything rotten is going on. The major editors in the field are all women. Got it. They like books about girls, and they probably don’t feel that they connect with book about boys.

That might surprise you, to think that an editor doesn’t feel like an expert in every genre, but it is true. A couple of years ago, I was looking at major publishers for picture books when I came across an article by a chief editor at one of the biggest publishers in America. She said roughly, “I don’t know what kids like. I’m nearly sixty, and I’m not a kid anymore. I don’t like fantasy stories, and I don’t like robots. But I like books that are beautifully written and can win major awards, so that is what I’m looking for.” Fair enough. But I have to admit that I found that article sad. You see, I’m still a kid at heart, and I think I know what they’d like when I see it.

So I’m all right with the idea that a female editor might not be comfortable picking out boy books. Since I’ve never been a girl, I’d feel daunted if I had to choose some books for girls.

This problem of having too few books for boys hit home with me years ago. I came home from work one day and found my wife sitting on the couch, demanding that my ten-year-old son read a book for school, while he silently cried. I decided to see if I could help, so I sat down and searched through the reading list with him. There were 25 books on the list, all of them written by women, for girls. Of course, his teacher was a female, and she loved the books. But I began studying the openings of each story, hoping to find something my son would love, and quickly saw my son’s problem. These books were soporific. They were so boring that they nearly put me to tears.

So I asked the teacher if I could take my son to the bookstore and look for something for him. But when we got to the Barnes and Noble, I asked about books for boys, and the only thing that the sales lady could recommend were books like The Stinky Cheese Man and The Day My Butt Fell Off.

Great, I thought, crudity. Is that the best you have to offer? It’s kind of like those crappy movies that are coming out, where every time that you see a dog you know that it is going to sniff a crotch, pee on everything, and try to hump a kid’s leg. I hate most children’s film nowadays.

What I discovered was that at the time—back in 2003—there weren’t a lot of great books for young boys. This was fifteen years ago, and I’ve been watching the pickings get slimmer ever since.

So my reaction was to write a middle grade book for boys. I wrote one called Of Mice and Magic, which tells the story of a boy who desperately wants a pet, so he buys a mouse, which turns out to have magical powers. I sold it to a regional publisher. Sales were good. We sold about 60,000 copies over the next couple of years, which would be good for a nationally published book, but it really only sold along the Wasatch Front here in Utah—which only holds about 1% of the US population. In short, if I’d taken it to a national publisher, it might well have sold millions. And, yes, both boys and girls loved it. Many teachers wrote and told me that it had become their go-to book for boys.

I point all of this out for a couple of reasons. First, as an author you ought to be researching your own genre, learning who the top editors and agents are, who the top publishers are, understanding why books are chosen and published. If you don’t, you’ll embarrass yourself. And don’t just listen to people who spout nonsense without doing their own research!

Second, when you find a big town where no one is selling pizza, bless the fates!

The next Writer’s Peak workshop will be held at the beautiful Zermatt Resort in Midway, which features something of a Swiss Resort theme and has its own restaurants and bakery attached. If you are feeling short on inspiration for writing, need help overcoming writer’s block or otherwise need to boost your excitement about your projects, this one is for you.

In David Farland’s Advanced Intensive Writing Workshop, which will be held in scenic Saint George, near the gorgeous canyonlands, Dave will focus on teaching you about plotting, storytelling, writing exercises, and information about how to break into current markets, but with this workshop, Dave will also try to personalize the experience by letting authors ask for help in the areas they need it the most, so that we can make sure to tailor the workshop to fit the writers’ needs.

Of Mice and Magic

If you are interested in Of Mice and Magic, you can get a copy or learn more here.

More than anything, Benjamin Ravenspell wants a pet. But when he buys a mouse named Amber, he gets more than he bargained for. No sooner does Ben take her home, than Amber turns him into a mouse too. You see, Amber has magical abilities, and it so happens that Ben is a familiar—a creature that stores magical energy. Together they each form half of a powerful wizard. Alone, they’re just vermin. Soon Ben and Amber find themselves pitted in an epic battle against a magical enemy who is as crazed as he is evil—and the fate of the world will rest on them learning to work together. 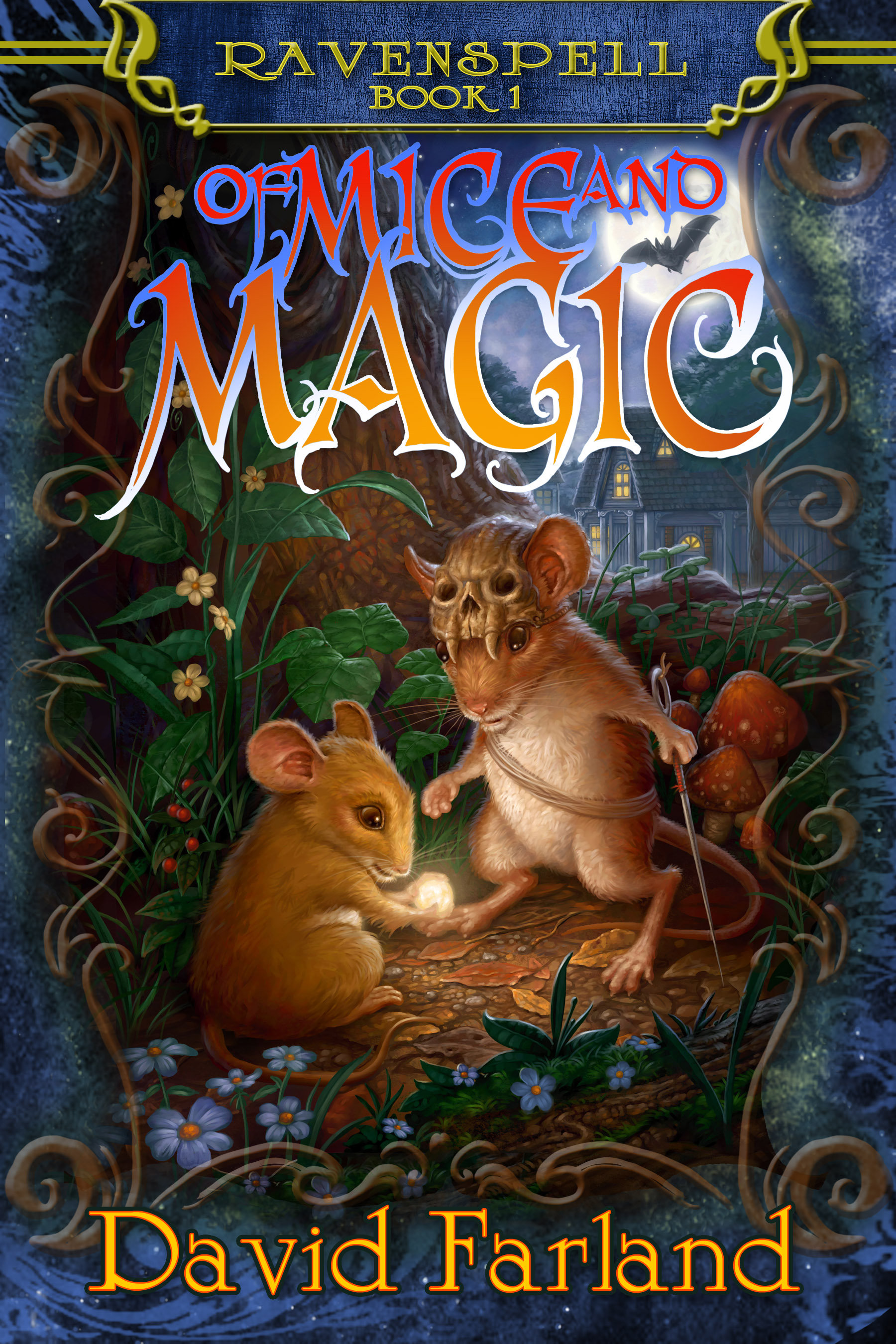