When I used to write for competitions, I would make lists of ways that judges might look at my work in order to grade it. For example, some judges might look for an ending that brought them to tears, while another might be more interested in an intellectual feast. A couple of you asked what my list might look like.

So here is a checklist of things that I might consider in creating a story.

First, a word of warning. When I was very young, perhaps four, I remember seeing a little robot in a store, with flashing lights and wheels that made it move. To me it seemed magical, nearly alive. My parents bought it for me for at Christmas, and a few weeks later it malfunctioned, so I took a hammer to it and pulled out the pieces to see what made it work—a battery, a tiny motor, some small colored lights, cheap paint and stickers.

Your story should be more than the sum of its parts. It should feel magical, alive.

But when we go through a checklist like this, we’re looking at the parts and not the whole. When you’re composing your story and editing it, you must be constantly aware of the whole story, keeping it in mind, even as you examine it in detail, making sure that one part doesn’t overbalance another.

My goal with my settings is to transport the reader into my world—not just through the senses, but also emotionally and intellectually. I want to make them feel, keep them thinking. This can often be done by using settings that fascinate the reader, that call to them.

I want my characters to feel like real people, fully developed.  Many stories suffer because the characters are bland or cliché or are just underdeveloped. We want to move beyond stereotypes, create characters that our readers will feel for. At the same time, we don’t want to get stuck in the weeds. We don’t want so much detail that the character feels overburdened and the writing gets sluggish.

So here are some of the checkpoints I might use for characters.

One of the surest ways to engage our audience is through our conflicts. When a conflict is unresolved, and when the audience is waiting breathlessly for its outcome, the reader’s interest will become keen.  They’ll look forward to the resolution unconsciously, and may even be thinking, “Oh, this is going to be good!” That state of arousal is called “suspense,” and it’s perhaps the most potent element of a tale.

Themes in the story might be called the underlying philosophical arguments in your tale. A story doesn’t need to have a theme in order for it to be engaging. Likeable protagonists undergoing engaging conflicts is all that you need in order to hold a reader. But a tale that tackles a powerful theme will tend to linger with you much longer. Indeed, such tales can even change the way that a reader thinks, persuade him in important arguments. Shakespeare made every story an argument, and the “theme” was the central question to his tale.

Some people will suggest that dealing with themes is “didactic.” Don’t be fooled. Those same writers will put themes in their own works, and usually they’re taking stands that oppose yours. For example, if you argue that morality is innate and central to what a human is, they’ll argue that it’s situational and we’re all just animals. They don’t oppose the idea of stories having themes; they may just be opposed to your views. So make sure that your arguments are rigorous and persuasive.

There are five elements that will come into nearly every scene in your story—setting, character, conflict, theme, and treatment. Your “treatment” is the way that you handle your story. The number of items that come into play in your treatment is so long, I can’t get into all of them. We could get down to the real nitty-gritty of putting a sentence together.

You’ll want to create your own list of items to look for in your treatment. If you notice for example that you’re creating a lot of long, compound sentences in a row, you might make it a goal to vary your sentence length. If you find that you’re using weak verbs, you may want to go through your tale and search for instances of “was” and “were.” If you find yourself using the word “then,” you might want to go through in your edits and make sure that incidents in your tale are related in sequential order, so that you don’t need the word “then.”  If you find yourself stacking modifiers in front of nouns and verbs, you might want to watch for that in your editing. If you tend to over-describe things, you might want to watch your descriptions.

In short, whatever your own personal weaknesses are in writing, you’ll want to create a list so that you can think about them when you write.

But here are a few elements to consider in your treatment.

Sometimes when you’re looking at a story, you need to think about it in “chunks.” Here are a few things that I think about when creating a tale.

Writing a story can be an exhausting exercise—intellectually challenging and emotionally draining.  When you’re in the throes of it, it may seem daunting. But you’re never really done until the outcome feels magical, and if you take care of all the little things that you should, the outcome will indeed seem wondrous. 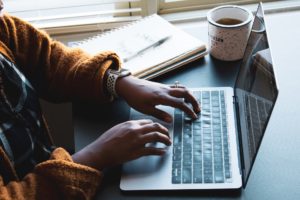 Every writer has his or her own talents and strengths. Don’t give up on your writing. Very often as a writer, I will find myself