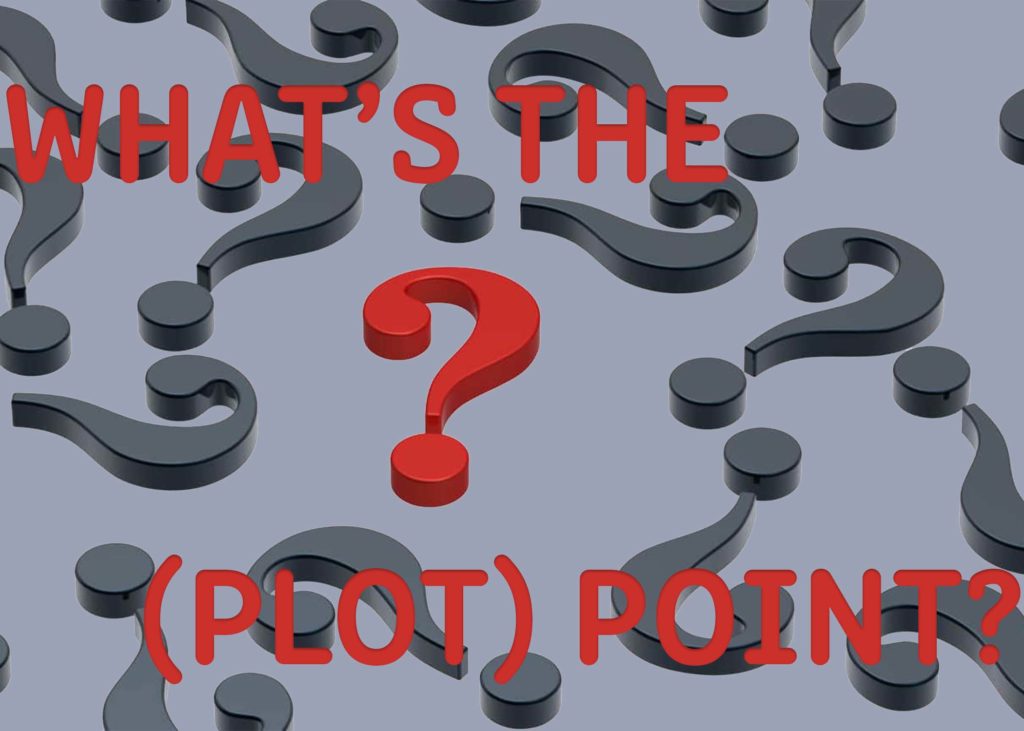 One reader asked recently, “How do you define a plot point? It sounds as if the answer should be simple, but it really can be complex.

When we write a story, we are interested in the things that change in a person’s life. So any time that something significant changes, then we have a new “plot point” that we need to put on our plotting chart.

For example, Dawn is on her way to work, and a car runs through a red light and crashes into her. The crash is a plot point.

She wakes in the hospital after three years and discovers that she has been in a coma. Since the wakeup scene is one that will need to go in the book, that’s a new plot point.

The hospital notifies her husband, and he rushes to the hospital—along with her kid sister. When she tries to kiss her husband, he says that he has remarried—to her younger sister. (Actually, he’s just living with her, but they have a two-year-old daughter.) That’s a big plot point.

Dawn goes into physical therapy, but her muscles are so atrophied, she can’t walk. She also has lost part of her memory. She can’t remember some 50% of the words she once knew. She feels like a real mess. In desperation, she decides to win back her husband. Reaching that decision is a plot point.

Recognizing that her husband isn’t legally married, she calls the police and tries to get him arrested for bigamy. She’ll do anything to get her sister out of the house. That’s a plot point.

And so the story goes.

In short, a plot point is anything that happens to a character, good or bad, that significantly changes that character’s life. So if a character gets fired, thrown out of the house, mugged, or wins the lottery, those are all significant events that would go into a novel’s outline.

Also, anything that the character does on his or her own initiative to affect change is a plot point. Thus, if a woman is mugged and she chases down the mugger, pepper sprays him, and wrestles her purse away—that’s a plot point, too.

There are times though when we have “floating” plot points. Let’s say that you have a character who is extremely self-sufficient, so much so that you feel it is necessary to show us how he became that way. So you decide to introduce a flashback where his father dies when he’s nine, and his infirm grandfather tells him, “You’re going to have to be the man of the house now, Charlie.”

Well, that might not affect the plot of the current novel, but the scene may feel almost necessary. So you look for a place to tuck it into the novel. You realize that the scene might be placed in a prologue at the front of the book, or it might appear a third of the way through, or it might be a memory that comes up as he’s dying and telling his own nine-year-old son that it’s time for him to become the man of the house. It might be a remembered sequence that comes in a dream. The important thing, though, is for you as an author to get that information into the story, but there isn’t a place that it has to go in a linear sequence. So it’s a “floating” plot point. The scene can go just about anywhere, and you as an author need to make an artistic choice as you try to find a place where it will be effective.

So I tend to create my story using firm points, where the tale unfolds chronologically as my character acts and is acted upon, and perhaps a few floating points that can be tucked in anywhere.