Many years ago, I heard a renowned magazine editor Gardner Dozois remark, “I don’t want just a great story in my magazine, I want a great writer in my stable.” He was talking of course about why he didn’t pick up new writers on their very first stories. He had a policy: if a new writer sent him a great story, he’d wait and see if the author sent two more fine stories, and then he would start buying.

His logic was simple. He wanted authors who wrote frequently and to the very highest quality. He didn’t want people who were just playing in the field, or trying to write one story and then use it as a vehicle to launch a career as a novelist, never to write him another story again.

You may not realize it, but that is the mindset of many editors. If an author sends them a story, whether it be a novel or a short story, the editor must look at it and decide whether to publish it. Now, if a known author sends a story and it’s fantastic, emotionally powerful, and just all around beautiful, there’s no question, the editor is going to publish it.

If an author sends in a story and his name happens to be something like Stephen King, his audience is so huge that whether the story is his best or not, the editor pretty much has to take it. Why? First it will boost the editor’s sales, and you can’t argue with fiscal solvency.

But more importantly, the editor wants big name authors in his or her “stable.” And the only way to keep an author in your stable is to feed him. In other words, you send him or her a paycheck.

So the job of being an editor to some degree becomes one of “building a stable.”

As a new author, I hated that. I wanted to write one great story and get discovered. In fact, when I was writing literary mainstream stories, I found myself trying to break into the big magazines. I discovered a little sociology magazine that paid well and sent them some stories. I kept getting love letters back from the editors, and on my fourth story was told, “We’ve decided that we would like to begin publishing you on a regular basis. This is kind of odd for us, since we really haven’t handled fiction, but we’ve always wanted to do it, and we never even considered the idea that we would have a single author that we wanted to publish above all others.” Unfortunately, they went out of business shortly thereafter, but it did gladden my heart.

But before I could write many more stories, I completed the novelette “On My Way to Paradise” and actually did find myself on the road to fame and fortune with a single story. It won the Gold Award for best short story of the year in the L. Ron Hubbard Writers of the Future Contest. At the award ceremony—which was held atop the world trade center with folks like Mark Hamill (Luke Skywalker) in attendance, along with writers like Isaac Asimov, Ray Bradbury, Robert Silverberg, Gene Wolfe, Andre Norton, Anne McCaffrey, and too many others to name—I was approached by several editors from major publishers and got my first novel contract. The novel based upon that short story won the Philip K. Dick Memorial Special Award and stayed on the science fiction bestseller list for five months.

So, in a way, I was able to break into the business on the strength of one story, but it is darned hard to do.

Now, as the lead judge for the Writers of the Future Contest and the editor for the annual anthology, I find myself in a quandary. You see, each year I get to scour through thousands upon thousands of stories and try to discover the best new writers of the year. Lately, I find myself thinking, “You know, this would sure be easier if I knew who some of these writers are.” After all, I could then look at the names of the authors and know which stories came from whom, and I would have some favorites. I’d at least have some authors that I could watch out for, and if the first two pages of a story didn’t quite grab me, I’d know to read on.

But that’s not the way we do it. We judge the stories blind. Each year I go out and try to find the authors who really do impress me the most, based upon a single story, and I create a stable. And at the end of the year I let all of my stable loose and have to start trying to fill it all over again.

Oy, what a headache. I sometimes think that I’ve got the toughest editorial job in the business.

In many very fine magazines, new writers never can gain entrance at all. An author needs to have a long career with a few major awards under his belt to gain entry to the stable. It would be so much easier to fill an anthology if I could do that. But I can’t.

Instead, every single author has to impress me in some way.

Not everyone in my anthology has the same gifts. Some of my writers are gritty, some are very funny, some will move you to tears.

Today our latest volume of Writers of the Future goes on sale, L. Ron Hubbard’s Writers of the Future Volume 31, and I’m really impressed with this group. If you’re interested in reading a bunch of great short stories from people you’ve never heard of but who will be famous in a few years, this is the place to come. And if everyone would just be kind enough to buy it today, on May 4th, Star Wars Day, then something unprecedented could happen: our new writers could hit the New York Times Bestseller list, and thus begin their careers as New York Times bestselling authors.

Wouldn’t that be cool! So here’s a link to the anthology, which is gorgeous by the way—printed in a large format with the illustrations for each story in full color. 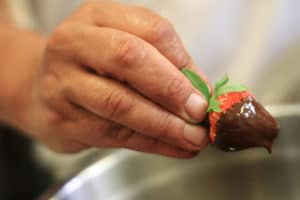